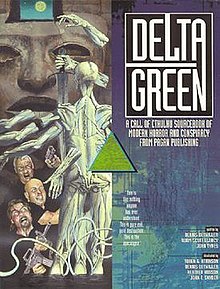 Delta Green is a contemporary setting, starting in the mid-1990s with intermittent updates thereafter. The game revolves around a fictitious secret organization, created by the U.S. Government following the covert raid on the town of Innsmouth, Massachusetts mentioned in H.P. Lovecraft's The Shadow Over Innsmouth. The organization takes its name from its World War II era codename.

Delta Green agents work undercover through other U.S. government agencies, recruiting across a wide range including the FBI, ATF, CDC, and DEA. It appears to have "gone rogue" somewhere between the 1960s and the 1980s, following a disastrous operation in Cambodia and a "deal" struck by Reagan-era rivals in Majestic-12, ostensibly with "Greys".

The 2016 edition advances the history from 1997 (Original release of the sourcebook) to the current year. In 2001, the September 11 attacks greatly affects the Intelligence community, including Delta Green and MAJESTIC-12. Majestic was weakened and destroyed while Delta Green has been brought back into the government fold, given a budget and official standing, using the War on Terror as a cover to their operation. There's also a group of old guard agents that were opposed to the restructure of Delta Green, preferring to maintain the old conspiracy running, forming their own splinter group known as "The Outlaws", as opposed to the official "Program".

The group was introduced in the seventh issue of The Unspeakable Oath, a Call of Cthulhu fanzine created by Pagan Publishing, in early 1993. Four years later, the Delta Green supplement appeared and spawned a number of its own supplements and novels. The premise is similar to The X-Files (although the original incarnation of Delta Green preceded The X-Files by almost a year[3]). Both draw on federal alphabet soup folklore, UFO conspiracy theories and other modern legends.

The Delta Green supplement lays the groundwork for organized investigations into paranormal crime and horror, setting up the initial plot and providing players with their motivations and the resources they need to carry out their tasks. It also provides a source of replacements for characters who go mad or are killed. Canonical materials revolve around threats from the Cthulhu Mythos, but the framework is very flexible. Delta Green agents typically know little about the Mythos.

Suggest new edition
Looking for Group is not affiliated with or endorsed by game publishers. Images are copyright their original creators, and logos are trademarked by the publisher. This information only appears here in an editorial capacity.